If you would like to know more about the Japanese aggresion and final destiny in the Pacific through some very rare colour footages pieced together from touching Japanese personal letters and diaries , then click on thissection to watch the Documentary

One of our loyal followers, Lloyd White has over the years build an impressive collection of Jeeps and he is still on the outlook for more versions. We have received some images of some of his Jeeps and I am sure that Lloyd is a familiar face to many other collectorsi, especially in the US. Go for a visit to "The Lloyd White Collection"

One of our team members is a collector of WW2 related collectibles.

We have visited his impressive displays in his home bar (JOE's BAR), build in his very safe and secure bomb shelter below his house. Even though it might look a bit congested, he emphasize that he is not even close to the limit of what he can fit in of collectors items. As long  as they are safe, I will keep looking out for more artifacts from the WW2 time. 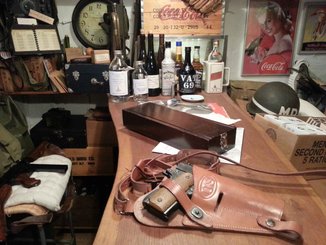 Find your ways in Normandy

When you think of WW2 warfare, you think of intelligence and mapping enemy positions, obstacles and other relevant data that would allow the attacking forces to be as prepared and be as succesfull as possible for a coming attack.

These data were sourced and maps produced by special units that used any source or method to get as precise data as possible as it was all a matter of life and death for the attacking forces to get all correct and relevant data included.

One of our friends and followers in the US, Tim, has specialized in finding these old maps from D-day and and have them reproduced. This allows the owner of the map to actually go back to the location of the battle and  "reconstruct" and imagine what the attacking forces had faced during their attacks and in same cases locate long forgotten defence positions.

When knowing the history, you are able to conclude how precise these maps were....knowing that the defending forces did everything in their power to hide, camouflage or even build fake defending positions to trick the enemy, it was a challenge at times and the resistance was an important partner in enemy land.

Visit: www.ww2dday.com and see if there is a map that would fit in to your collection. And dont forget, no WW2 vehicle should go to Normandy without a WW2 map to give the visit an extra dimension.