Pegasus Bridge symbolise one of the finest airborne operations in World War Two. Precise and successful. This is the story of a visit to the Bridge and the Merville Battery in June 2009 during the celebration of the 65 years of the D-Day operation in 1944

The Jeep engine purrs like a sewing machine and it has clearly been good for the old vehicle to be driven daily and for long stretches all the way from Denmark to the fields of Normandy. A pretty long journey in a noisy and stiff vehicle with no more comfort than what you can get out of a seat cushion approx 3 inches thick and hardly any suspension in the vehicle. From the shores of Jutland, via Esbjerg sailing to Harwich on the East Coast of England we had taken a long stretch down to Portsmouth, to meet a large group of several hundreds of WW2 vehicles and their happy drivers from the English Military Vehicle clubs. Together we were assembled to "invade" the Normandy shores - 65 years after the actual D-Day invasion in 1944. 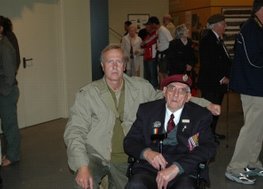 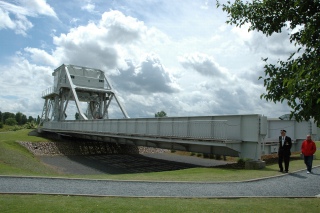 After setting up our camp in Asnelles, close to the British invasion beaches, in fact the same location for the last 15 years, we have taken any opportunity to take small and long trips to the many historical sites in the region. This morning we startet with a good and solid breakfast enjoyed in our old military dining tent discussing this days programme. We were going to visit the famous Pegasus Bridge where British "airborne troops" landed in their gliders in 1944.

After packing the vehicles for this days journey, we are now finally moving eastwards, driving in our usual coloumn with the small Jeeps in the front and the larger vehicles in the back. The weather is a little windy and gray, which is typical for this season and pretty much as it was in June 1944. We have made an appointment with one of my good English friends, Martin Watts, who also happens to be a lecturer in Modern History with two universities in the UK who is taking some days off in Normandy these days. Besides lecturing and writing books, he also holds private talks and guides tours around the European battle fields and today he has offered to give us a talk about the British Airborne landings at Pegasus Bridge in 1944. 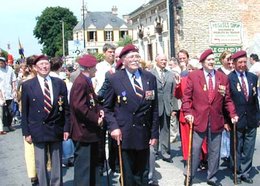 We are now closing in on the bridge and there is a jumble of old vehicles and veterans in their classic dark blue suits. We quickly find a convenient parking spot at a parking lot right in front of Pegasus Airborne Museum and within walking distance of the famous Cafe Gondre, which was the first French cafe that was liberated by the English Airborne troops right after they secured the bridge from the defending German Troops. We have agreed to meet up near the river on the opposite side of the river and Cafe Gondre.

"Good morning Chaps" - Martin is in a great mood and it's good to see him again. Although we have the pleasure of working together for the same employer on each side of the English Channel and have often been talking about this "Rendezvous" on French soil during the marking of D-Day, it's different to actually stand here now dressed up in our full WW2 uniforms for the correct appearance, ready to receive our briefings from Martin.

"Welcome to the Pegasus Bridge, Gentlemen". We are all all ears when Martin starts his talk and he has the skills of making every story both interesting and lively ... . 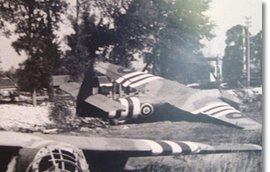 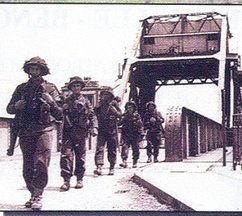 "The story of the glider borne attack on the bridges over the Orne canal (Pegasus Bridge) and River Orne, in the early hours of D-Day, is one of supreme airmanship, courage, speed and surprise. The object of the British airborne attacks was to secure, on the eastern flank of the invasion, water crossings that were required for the breakout from the beachhead, and to destroy other water crossings, in order to deny the Germans easy routes of reinforcement. The attack on the canal and river bridges of the Orne, which were about 300 metres apart, waas undertaken by an enlarged company, consisting of 8 platoons, of the Ox and Bucks Light Infantry, under the command of Major John Howard. Without knowing their target, Major Howard's company and the glider pilots undertook intensive training over a period of several months, before D- Day. The company was carried in 6 Horsa gliders - 3 per bridge- and, as you can see, the 3 assigned to the canal bridge landed - silently- only metres from their objectives, about 10 minutes after midnight. Major Howard himself led the attack on the canal bridge. The platoon in the first glider attacked the bridge directly, during which assault Lt Den Brotheridge was killed by machine - gun fire from the vicinity of the Cafe Gondree on the far side of the bridge, troops from the second glider attacked German entrenchments to the east of the canal and the third platoon attacked German positions to the west. Thanks to the amazing accuracy of the landings, and the fact that the gliders swooped in silence, all attacks were immediately succesful and the bridge was taken, never to be relinquished, in only ten minutes. total casualties were two dead and fourteen wounded, an outstanding airborne action"

Martin shows us the actual landing site of one of the gliders, which was actual right next to the bridge. It must certainly have taken the German troops by full surprise, when the silent Horsa gliders came down in the middle of the night. Martin takes us through the details of the short battle in the most interesting way and it is easy to feel the history, standing there in the wind at the banks of the Caen Canal. 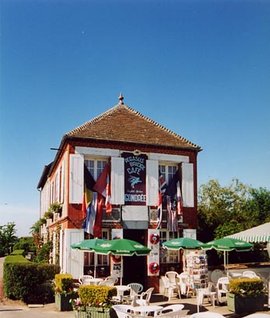 "So Gentlemen, I think we can all need a good cup of French Coffee at the exactly right spot"... After the interesting lecture it is time for a cup of coffee at Cafe Gondre where the queue is long, the coffee cold and very expensive, but something you must experience. The coffee is made and served by the daughter of the original owner, in fact the same little girl, now well up in the 70s, that was sitting on the lap of the British officers back in 1944, when they quickly transformed the cafe into a sort of central command center after the bridge was secured.

After the coffee was consumed, it was time to visit the museum where the original bridge is on display as well as a 1:1 model of a glider. The museum is quite interesting and the are many veterans this day, who in one way or another were involved in activities in this region during 1944. Many of them in wheelchairs and with young carers to show them around. A touching sight and we have the opportunity to speak with many of them. They happily tell small anectdotes from the time.

After our visit to the museum we decided to split up. Someone wanting to go out and visit a WW2 flea market and the rest of us planning to visit the German artillery position, Merville Battery, not far from Pegasus Bridge. While the sky becomes darker and darker we head out. There is rain on the way and we hope to reach the Merville Battery before the rain start to set in. While driving through the small roads towards the Battery the hell breaks loose. With the sound from the thundering just above us, it starts to pour down. We have of course not prepared ourselves and the rain ponchos are in one of the webbing bags hanging outside the Jeep. We quickly conclude that there is no chance for this just being a short burst of rain as the sky is completely dark. I quickly stop the Jeep and run outside in the rain to take out the two rain ponchos and get ourselves covered. In the mean time we experience the rain coming from all sides through the open sides of the Jeep as the wind increases.There is only one thing to do, and that is to move forward and try to reach the Battery so we can organise ourselves. 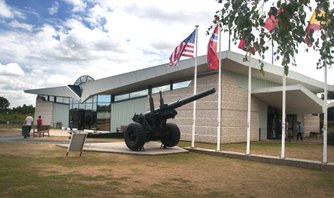 After 15-20 minutes driving through the pouring rain, we finally reach the location of the Battery and the rain has finally stopped. We have fortunately avoided becoming totally soaking wet thanks to the German Rain Ponchos. After organising ourselves, we are now ready to enter the museum, that seems to be in the middle of a residental area.The visit to the Merville turns out to be surprisingly interesting. Not only are the Battery rather intact, it also has some very interesting displays and offers some sound and visuals show that gives the guests an opportunity to imagine how it musth have felt during the battles in June 1944. The Battery also includes a complete Dakota C47 airplane that played such an important role during the entire WW2. 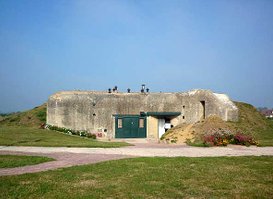 After taking our time to enjoy the displays and drying our clothes.. it is time for us to head back to the camp… Martin is now leaving us to go back to his comfortable hotel far away from the battle sites of Normandy. We start to move back to the camp some way from the Merville Battery. The gear of my Jeep suddenly starts to act strange.. it seems to be very difficult to put it in to gear when moving… Very strange. Most likely the clutch that needs to be adjusted. We aim for the bigger roads to avoid changing gear to much and after a very long and very stressfull tour back,  we finally reach the camp… I can hardly change the gear now and have to stop the engine to put it into first gear.. something is indeed wrong and it might be the clutch or maybe something worse.. I must be able to adjust it…  But now it is relaxation.. no more Jeep today.. Tomorrow will be my "Road Side repair" day… It should hopefully just be a little detail…. 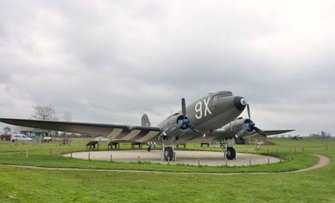 Next day the condition of the Jeeps clutch turns out to be much worse than hoped for… A need to change the actual clutch arm inside the bell house is needed and thanks to good assistance from my friends and a combination of luck, flexible hands and fortunately the luck of Getting a new clutch arm from "Jeep Parts Ltd" that luckily were still around in Normandy still selling their spare parts, we got the clutch fixed.. and since then it has never been better. Phewww. Nice when it is over, but not nice when you are in the middle of the problem.. No one wants to be in a situation where you need to take the entire Gear Box or Transfer of in the middle of Normandy where you instead where supposed to drive around and enjoy the many sights. 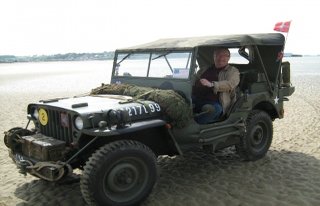 Martin Watts  is lecturing in Modern History with two universities in the UK and is occassionally guiding tours around the battlefields of Europe. Furthermore he has also written book and articles about World War Two.

At the left hand picture, Martin Watts is seen at the invasion beaches, close to Arromanche at the steering wheel at Kim Frost Fuglsang's British Airborne Jeep in 2009.