The feeling of sweat dripping from my nose tip start to irritate me. It feels like being in an overheated sauna. I am running up the many steps toward the top of the hill while traffic from Orchard Road gradually decreases as my expectation of what awaits me up in the old English bunker increases. 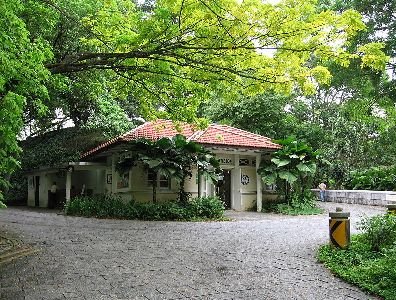 I am in the centre of Singapore in 30 degree heat and a humidity of around 84%. The day today feels extra hot and humid, but nevertheless I have decided after only 14 days in Singapore, to visit the, for many people, unknown location. "If I am to be here in 3 - 4 years, there is no point just to hang out under the aircondition at home until the sun has gone down" – I think.  So it is the desire to discover that drives me this Saturday morning when the rest of the population makes their favorite hobby ..... to shop in one of the major shopping centers in, what I perceive to be in minus degrees!

I have now come up to what resembles an old English ice cream parlor, neatly kept, with signs referring to "The Battlebox" .. the goal of my trip.

For those who know Singapore's history during WW2, they know that Singapore was one of the British main strategy points in Asia in an attempt to curb Japan against their aggressive march forward into the region. Singapore had to be by no means fall in to the hands of Japan. For the same reason the British sent a large number of troops and equipment from England, Australia, New Zealand and India to Singapore to make it a strong fortress. 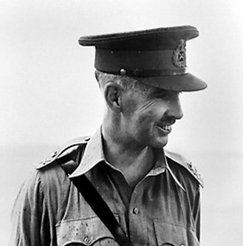 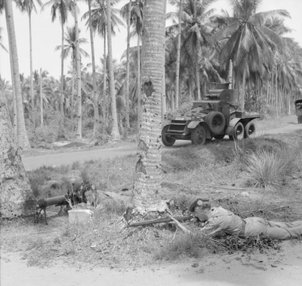 The year was 1942 and more than 85,000 soldiers were now positioned in and around Singapore. Fortifications and bunkers where build with primary focus on a possible intrusion from the sea. It was not believed that an invasion from the north was most likely to happened, but nevertheless forward defense positions and observation well inside Malaysia were established. While Chinese residents of Singapore were anxious to see and fear the worst as it was well known that Chinese were targeted by the Japanese due to Chinese resistance fighters fighting the Japanese forces further up north and that these resistance fighters were supported by Chinese living in Singapore. The Japanese treated the Chinese cruelly and in no way had anything to spare for what they saw as an underclass, which was only useful as slave-like workers. While British entrenched themselves  in all areas and felt well prepared for the imminent confrontation and otherwise in all areas, military strategic and technology, the Japanese superior Japanese were preparing an aggression against Singapore with the aim to consume and use Singapore as an important platform for their continued expansion in the Pacific. Furthermore a Japanese occupation of Singapore would also complicate a possible Allied aggression against the Japanese mainland if needed later on.

That the British forces, both technologically and strategically, would be superior to the Japanese, would later prove to be anything but correct. To emphasize this Bastion importance, Churchill issued a decree to Singapore in no way could fall into the hands of Japan. There had to be fought to the last man.

The heat was now excruciating and I stood contentedly in front of the entrance to "The Battlebox", the central bunker during the Battle of Singapore. I could finally disappear down in the cooler underground. 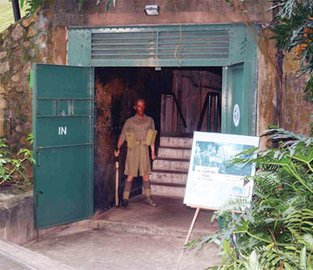 In the opening stood a figure in complete English outfit and kept watch. Down some stairs through some steel doors. I had chosen not to participate in one of their organized group tours .. and now had the entire bunker by myself. From speakers you could hear bombing and killing noise of the firing of handguns while military commands resounded through the bunker. Very realistic.

In the 60s it was decided to close and seal off the bunker for safety reasons, then it was forgotten and was empty up until 1988. A journalist found some leads through research, that there should be an old bunker in the subsoil under Canning Hill in central Singapore. In February the same year, they found the bunker again, which of course was completely overgrown by tropical plants and shrubs. When they opened the bunker they found only the remains of a dog that apparently had been caught on the wrong side of the bricked-up entrances. It was decided for the ambitious project to open the bunker as a museum, but as it was completely empty, everything had to be recreated as in 1942. It soon proved that it was impossible to obtain some of the earlier interior locally and they had to rebuild from rare photographic material. Volunteers from  England, (Imperial War Museum) worked focused and on a very limited budget, to lead the bunker back into the black days in February 1942. Much of the required interior was found in museums and private collectors in England and on the whole was a lot of the work on a voluntary basis, perhaps in a greater degree than normal since the fall of Singapore and the surrender to the Japanese belong to one of the dark chapters in English military history, and perhaps even a blemish, not many will want to remember. The case was of course, that in spite of an absolute majority equity and all opportunities to prepare for a possible invasion, the British and their colonial army were taken by surprise because of alternative Japanese strategic thinking. 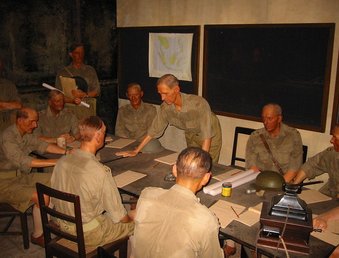 I have now moved around the bunkers many small rooms, which by design could be any military barracks in England. Radio rooms, assembling room, dining area, medical room and command room where wax figures of all the historical figures are gathered around the long table, just as they had gathered on February 15, 1942 to take the fateful decision to surrender to what they thought was a supernumerary Japanese strength. The Japanese had targeted and very swiftly, defeated all the advanced British forces in Malaysia and after the British took up the battle on the outskirts of Singapore, the intake water supply to Singapore was attacked reducing the important water supply to Singapore. In every way the English were being overrun and the colonial superpower pride with General Percival in charge had suffered a sharp crack. What was worse was that the road was now free for Japan and their  continued aggression in the Pacific.

It was quite sobering that only the British chiefs could  move around in the large concrete bunkers. All had carefully described space and restroom facilities could only be used 2 at a time. There were altogether many restrictions on personnel. Forexample there were only a few who knew of the associated emergency shaft, which also was in fact aimed at the very top ranking. 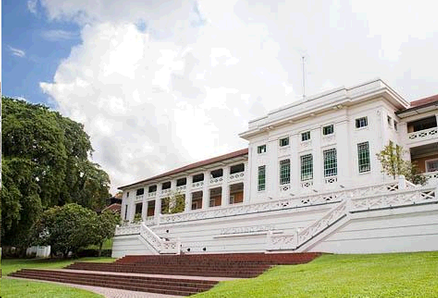 After the interesting visit underground, I was now back in the humid tropical heat. The trip was not over yet, because I just had to take me a peek at what formerly constituted Singapore's military headquarters ...  also called "FortCanning." Today, they serve as a kind of cultural center where you can rent the large rooms which formerly constituted the extensive administration, dining hall etc.. On this Saturday swarmed here in small sweaty kids and balloons in all sorts of colors - birthday party! I decide immediately to move me out into the fresh air to take a look at the surrounding areas. An impressive sight with exercer field. However, most now grown up and functioning as a local park in Singapore. The main building rises on the top and from the wide covered terrace, one can overlook the entire park.

Since I have drunk my packed 2 liters of water, it is now time to find a  place in the shade to rest a little ... Jet lag and fatigue after many hours of work in the office. Today's excursion has reached its end.

On the way down the hill, I can not help but think of how it has been running around in this sizzling hot weather wearing full English outfit .... Admittedly, in shorts, but still tight boots, "tin hats". It suddenly becomes crystal clear how simple and effective the Japanese strategy was widespread in 1942. Interrupting the vital water supply to Singapore ... so brilliant and yet so simple and so straightforward. Without fresh water in this heat you are done!

Strange that the English units could not foresee this risk ... No wonder that Singapore's case is a black and embarrassing chapter in English history.