New Diggings at Adam Park no 17

Another week of diggings in the Adam Park area has just been carried out by Jon Cooper supported by a team of volunteers. New exciting findings enable to add more details to the heavy fightings in Februar 1942 and is another brick to the wall of understanding Singapores WW2 history. I had the pleasure to join Jon on the first day of diggings and it was a very hot and exchausting experience, but also very inspiring. 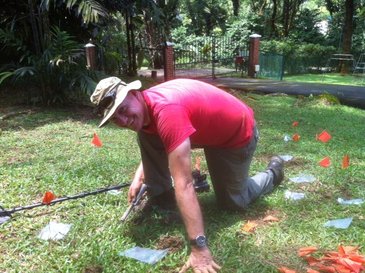 It's Monday morning and I'm sitting in the heavy traffic moving towards Singapore financial district. However, I am not going to work this morning, but am on the way to Adam Park # 17, where I have arranged to meet with my new good friend Jonathan Cooper, also called Jon.

Jon is an archeologist from GlasgowUniversity and resides in Singapore with his wife and children. Jon has worked hard to get both the public and the authorities to see the importance of getting the WW2 history of Singapore mapped. . To cut a long story short, he was the initiator of the archaeological project in the area around Adam Park in Singapore that saw some very intense and heavy fighting in February 1942 between the attacking Japanese forces and young British soldiers. After the fierce battles where the Japanese got a supernumerary English and Australian-led military to surrender to the Japanese, the area around Adam Park transformed into prisoner of war camp.

The area is one of the few areas in Singapore, which still stands as 1942 with the surrounding green areas, gardens and drainage channels between the properties so that the regular heavy rain can be led away. This has made the area unique as you almost, just by scratching in the surface of the soil, find left over from the fighting and the many prisoners of war. This includes both cartridges, bullets, grenade fragments. If you dig a little deeper you will find helmets, gas masks and water bottles. On the whole, there is a wealth of historical effects and waiting to be dug out of the moisty tropical soils. 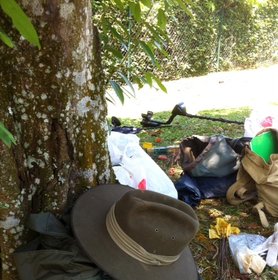 Already a year ago, I established contact with Jon and referred to my website, where I had already written an article about his efforts from other newspaper articles.  I was then invited over to one of his many digging projects and were shown around the area while Jon eagerly took me thorugh the area to show me how the fighting had taken place. His task was to identify how the  battles went on by recording every detail, from his findings, such as firing projectiles, grenade fragments to personal effects such as gas masks, badges e.t.c. The entire area is divided up like a chessboard. Followed by a sweep of  metal detectors followed by the actual excavation work. Often you will be disturbed by recent installations such as water and waste pipes, but the interesting thing is that findings relating to the fightings in WW2 are quite easy. Adam Park was an ideal defensive position and this combined with the fact that the defending units from Cambridgeshire Regiment had been cut off from their main command, meant that they were to hold and fight a difficult enemy, which ended in brutal physicial man-to-man fighting as well as house-to-house interaction including No 17, which served as a hospital and is the goal of our excavation today. During the fighting it burned to the ground when an ambulance, which was parked outside, was hit by a grenade and went on fire so that all the injured patients had to be evacuated immediately. For the same reason you will find car parts and melted glass in the subsoil mixed with fired and non fired ammunition. 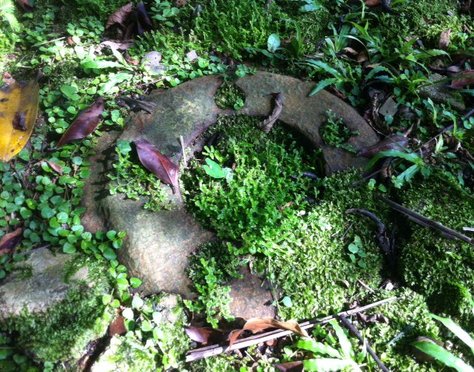 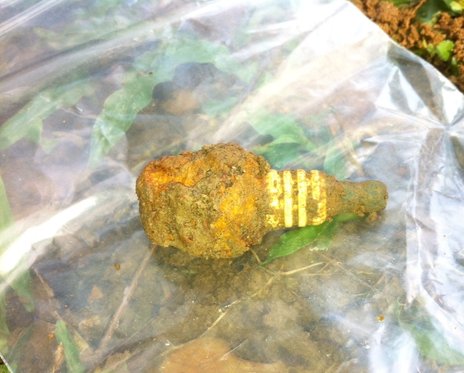 Here I am  in the traffic and my mood is high. The weather is dry and no sign of rain or thunderstorms over the area. Today, only Jon and myself will prepare the digging on this first day of an entire week of diggings. A team of four volunteers will be coming in the following day to work on the site. I find myself a suitable parking space in the shade of a tree down the road and heading up through the narrow road to No 17 where I will be greeted by a large iron door that automatically opens when I show up. Jon has already dragged his equipment up in the shade of a tree and I have made myself clear. 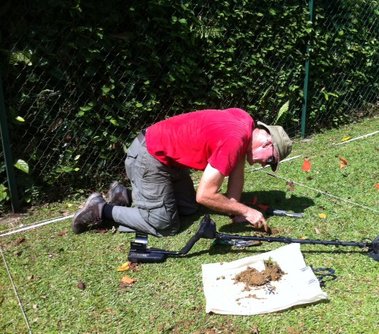 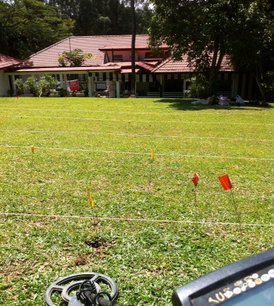 After a brief instruction on today's tasks, I begin to pull the liner across the garden with 2 meter intervals. After disgusting is done we distribute the various plots and goes off in the hot sun with our metal detectors. For each indication, we put a little orange flag in the ground so we can get back and dig later. After spending the morning to explore and eventually finding out that there is not much to find in this part of the garden as there have been digging in recent times and the detections are distorted from water pipes and we are by now well warmed up by the relentless tropical sun, we decide to stop for lunch. We're both pretty discouraged by the lack of results and discuss our next move.

We decide to start with the detectors on a plot of land next to the old house, which after the war was rebuilt as it was before 1942. It does not take many minutes before the indicator starts to beep sweetly. We are still a little critical as this would be a typical place to throw debris, so we continue to put the orange flag in the ground and continue the detection. It gradually becomes clear that this can not only be construction waste. We begin to dig into the ground at the orange flag and shortly after, the first bullets and cartridge cases to emerge. More and more small plastic bags with various content from the fierce fighting in 1942  are put on top of the diggings and show us that there has clearly been heavy fighting in this particular area. There must have been some sort of melee when Japanese forces attacked the burnt out or still burning building. We decide now to pull strings across with 2 meters intervals to enable to record the exhibits. 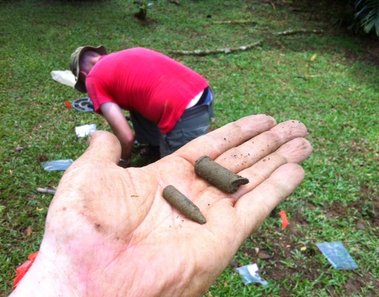 We continue to dig and still find some construction waste and what could recall the remnants of the former house. I am about to be well tenderize in the body and my arms are tired. I have a now dug a few holes and found nothing of value, so I'm about to lose heart over and verbally express my irritation ... "Give me but just some interesting findings" before we finish for today. Still not much luck.

Then when I more or less decide to dig the final hole for today ..... "Jackpot" .. up of the moist soil appears an angular object ... "Can it be true?" .. “No, it would almost be too much”. The object that I most wanted to find: one of the rare badges from the defending units from Cambridgeshire Regiment.

I call on the Jon ... this find makes him very joyfull. This is what he describes as a highlight and we shall immediately take photos for Adam Park Facebook page.

Like any other trained and experienced archaeologist, Jon begins to speculate "why this badge is just laying here in the soil 10 cm from the surface." We get an interesting discussion and it is clear that Jon has a good experience in analyzing the placement of the findings and knows how to put it into possible events. Two of his first theories is that the badge has either been affixed a cross over a fallen soldier as this place would be a typical place to bury any of the many dead soldiers from the hospital. The badge is then fallen off after you have moved the buried soldiers to Kranji cemetery. Another theory is that the British soldiers were ordered to dispose of their badges at the capture by the Japanese. But since we are convinced that this location is also an ideal place to locate a machine gun position, it can also been that the badge simply has fallen off during the fighting. This is confirmed by the many Japanese and English 303 bullets and cartridges cases, parts of the English webbing. But more digging and mapping is needed. But exciting to try to wrest out a little story out of a piece of metal that has been in the ground since 1942. 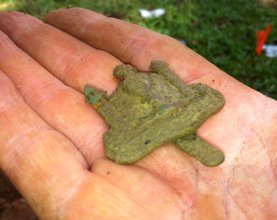 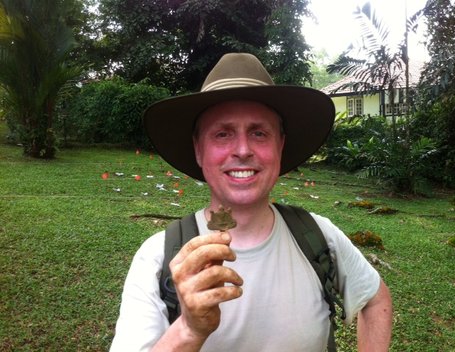 We will now conclude for today since it's start pulling up for a game of heavy tropical rain and thunder started to rumble in the distance, just as cannon from enemy artillery sounded in February 1942. It must have been a terrifying experience for the young soldiers, many of whom, had just arrived 1 to 2 weeks before the violent fighting.

Today has been a very hot day and I sweated more than I can remember for years out here in the tropics and can not help but think of how the young soldiers must have felt, far away from home, in a strange new environment under enemy attach. 2-3 days to find out if you were a “surviver” or would be left to rest here far away from the shores of Britain.  I take my hat off for their toughness in this unbearable environment.

The analysing and mapping of the findings can be followed on the dedicated Facebook siteand exciting conclusions are already being made…..