However sometimes you are in fact so fortunate, that the story behind an item comes with the item, which is exactly what happened to me when I came across this nice Canadian WW2 horn from Ontario Regiment, that had been kept in the family possession together with its interesting story.

Now it was time for it to change ownership and when I told the owner, my intention to publicise its story on my website, I got it at a fair price including the handwritten account from its previous owner.

Here is the story of the WW2 Canadian Horn from Ontaria Regiment:

In the last days of April 1945, shortly before the unconditional surrender of the Nazis on Luneburg Heath, 2 Canadians and 1 American soldier met in northern Germany in the middle of the Allied advance. A warm friendship quickly arose between the 3 soldiers and when they were to be separated again, they swore that they would be reunited in Berlin after the end of the war, if they would be so lucky as to survive the war.

All 3 friends happily survived the war and of course remembered their appointment.

As early as 1950, on the anniversary of their first meeting, they met again in Berlin. The 2 Canadians brought the horn in question and to mark their reunion, a fanfare was blown over Berlin. The three friends then agreed to meet in Berlin every 10 years on the anniversary of their first meeting in 1945. The horn was divided into 3 pieces and each was given either a silk cord, a mouthpiece or the horn itself. The American was allowed to take the horn with him and took very good care of the personal and symbolic treasure. They had agreed that only when all 3 friends were together should the horn sound. The 3 friends thus met again in 1960 and 1970 where the horn was again allowed to apply a fanfare.

Exactly what happened next is still unknown, but the two Canadians did not show up in 1980, so the American, who had meanwhile settled in Denmark, kept the horn in his custody until his death in 1986. However, before his death, he had made sure to pass on the story to his grandson, who later inherited the horn.

At one point he lost the horn in Copenhagen and only became aware of its existence again when it appeared at an auction, still with the handwritten story attached. The daughter of the grandson decided to reunite with the WW2 Canadian horn and bring it back in to the family possession.  Besides the handwritten story, the horn was still without a silk cord and mouthpiece. Some years later, however, she chose to sell the horn and its story to a new worthy and appreciative owner.

Unfortunately there is no knowledge of the identity of the 2 Canadian fellow soldiers who never came in contact with their American friend since their last rendezvous in Berlin.

Fortunately I became the new owner of the horn with its touching story and have following the purchase, bought a new mouthpiece and silk cord as well as a suitable and protective WW2 field bag for the horn. It will of course be played again on appropriate occasions and has already been played at during some WW2 reenactments.

Details about the horn and The Ontario Regiment:

The horn itself has belonged to the Canadian Ontario

Regiment, also known as the "Black Cats" with

reference to the cat in their insignia.

The Ontario Regiment did, participate in the invasion

of Sicily in 1943 and in particular in the Battle of

part of the 1st Canadian Armoured Brigade, and in

moved with the 1st Canadian Corps to North - West

Europe as part of OPERATION GOLDFLAKE, where

it fought until the end of the war.

The unit fought with distinction in several theatres

during the war, beginning with the Allied invasion

of Sicily in July 1943, through the Italian Campaign (World War II) seeing action in the fierce Liri Valley, Monte Cassino, and on to Ortona.

In 1945, the unit entered the Northwest European theatre where it fought with distinction in the Dutch Campaign winning honours at Arnhem. 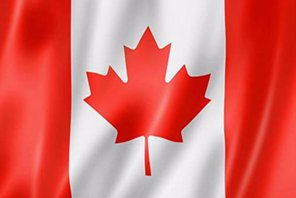 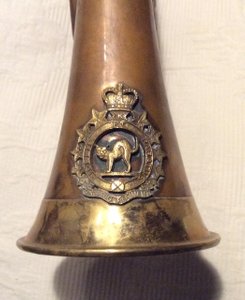 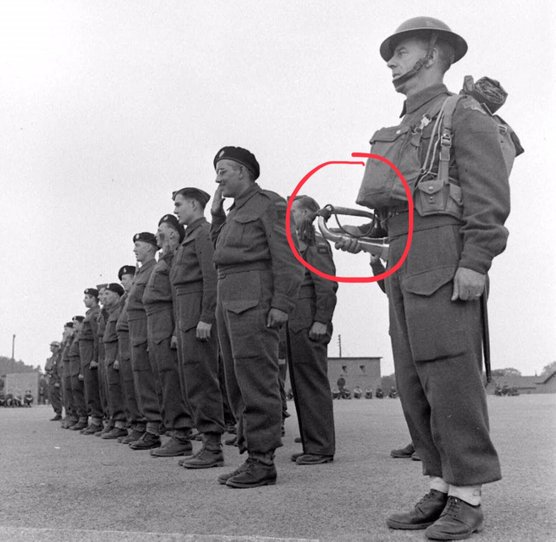 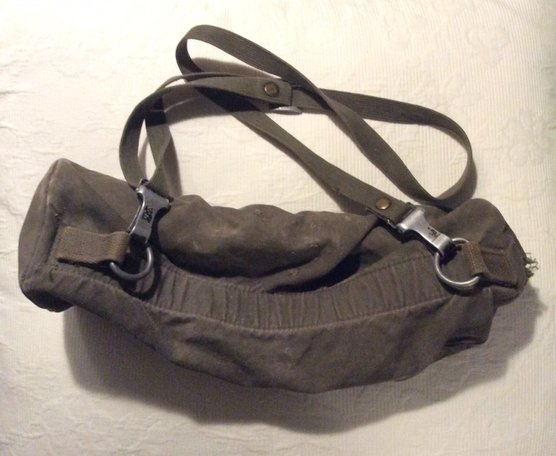